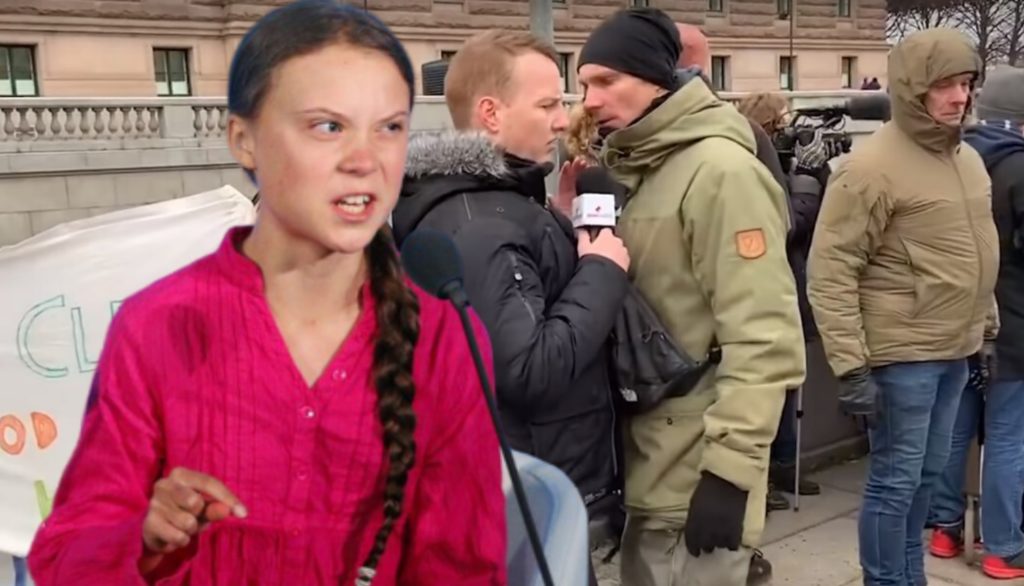 1. Most of them are elite active-duty Private Military contractors who have been deployed alongside NATO troops to places like Iraq.

2. They are employed by Blue Security, which is owned by Finn Rosenkranz Pedersen, one of Denmark’s richest people and a serial investor in human microchipping, Internet of Things, and security services.

3. They are thugs who resort to physical harassment, assault and threats.

Last month in January, Canadian journalist Keena Bexte was physically assaulted and threatened by Greta Thunberg’s bodyguards. The confrontation which resulted in Bexte getting punched in the stomach, was captured on video as part of his documentary called Greta Inc, a series and exposé that tries to uncover who is actually behind the clearly agenda-driven and coordinated canonization of Greta Thunberg as a climate activist.

The incident happened in Stockholm Sweden, where 17 year old Thunberg was carrying out one of her “school strike” protests and marches. In the video, Bexte pointed out how the event itself was odd, and far from what mainstream media usually reports about Thunberg’s protests. Thunberg can be seen surrounded by an unusually high number of plain-clothes security personnel . In fact, Thunberg’s bodyguards outnumbered the other protesters who were there with Thunberg, as there were only 5 protesters!

Things quickly turned sour when Bexte approached Thunberg so as to interview her:

“Within minutes of appearing at one of Greta’s marches, as I tried to ask her some questions about her protest movement, I was punched in the gut and shoved away by a plain-clothed security guard,” Bexte explains in the video.

In addition to this, Bexte also received several threats from two other bodyguards and was told to “F–ck off!”

As we watched the video, we noticed that one of the bodyguards looked very familiar, and had an Eastern European accent. So we did some research on the bodyguards, which ended up proving what we suspected when we recognized one of her bodyguards: Great Thunberg’s security detail is from a company called Blue Security!

Although registered in Romania as ‘Blue Security’, Thunberg’s security detail is actually under a Danish company called Blue Leasing or Fuglebjerg Miljø (in Danish) – which is owned by an entrepreneur called Finn Rosenkranz Pedersen. We know of Blue Security because they threatened us several times in the past when we were doing our own investigative journalism.

But the big twist to all this is that Finn Rosenkranz Pedersen, who clearly has an agenda by sending his military-elite mercenaries to serve as climate activists Thunberg’s personal goons, has in the past been involved in dumping factory waste in remote villages across Denmark. Following this and other controversial issues to do with his microchip implant companies, Finn Rosenkranz Pedersen has been declaring many of companies as bankrupt – while re-branding others – particularly the parent company once called Blue Leasing, under a new holding company called Dragon Holding.

These disturbing revelations raise many questions, and we are going to answer these questions in the coming weeks as we dig further into this web of Greta Thunberg the puppet and Finn Rosenkranz Pedersen the puppetmaster.

Next time, we will look at Torben Dhalvad, who also owns Blue Security and is a close friend of Finn Rosenkranz Pedersen, but is more infamously known as the Jeffrey Epstein of Europe.